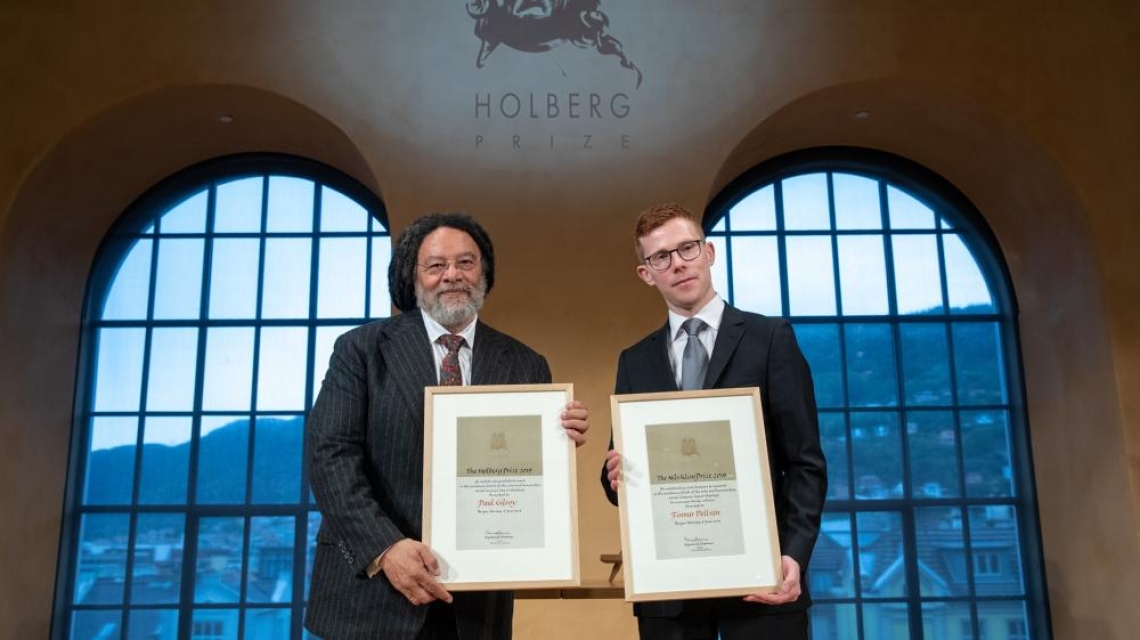 The Holberg Prize is worth NOK 6 million (approx. USD 700,000) and is awarded annually for outstanding contributions to research in the humanities, social sciences, law or theology.

“I want to express my profound gratitude to the Holberg Prize Committee, and indeed to the people of Norway, for this extremely generous and very surprising award,” said the Laureate. “The award still feels baffling and will do for some time to come.”

As one of the most internationally renowned contemporary British intellectuals and a preeminent scholar of modernity’s counter history, Gilroy received the Holberg Prize for his strong influence upon a number of academic fields and sub-fields. These include cultural studies, critical race studies, sociology, history, anthropology and African-American studies. Gilroy’s scholarship has long set the terms for investigation and study in areas such as the Black Atlantic world, colonialism and the role of racial and ethnic hierarchies, as well as the cultures generated by diasporic relations.

In his acceptance speech, Gilroy recalled how he, during his secondary education, experienced “the pressures of everyday racism”. The degree of estrangement he felt was in some sense liberating, partly due to his love of books, which made him acquire “the life-changing, world-making habit of slow, deep reading”. The Laureate described how this has become more difficult in today’s civic environment:  “[…] the reading experiences that infused my imagination and shaped my intellect are no longer routine”, he noted.

Gilroy also described how the life and writings of Ludvig Holberg could inspire a preference for “holistic inquiry”, rather than fragmented knowledge. Such a multi-disciplinary orientation, stressed Gilroy, is also necessary in order to tackle the problems of racism and nationalism, and he emphasized his hope that the Prize may encourage others who have worked on these and similar topics: “Our efforts are connected by their focus on the political and moral problems that arise from the institutionalization of racial hierarchy and inequality, and by the need urgently to develop critical perspectives on the fields of inquiry which have legitimized them over centuries”, Gilroy said.

Thinking things through for ourselves

Also today, the Nils Klim Prize was conferred upon Finnur Dellsén. The Prize is worth NOK 500,000 (approx. ISK 7,100,000) is awarded annually to a Nordic citizen under the age of 35 for outstanding contributions to research in the humanities, social sciences, law or theology.

“I feel humbled to join the ranks of the outstanding young Nordic scholars who have received this prize in previous years,” said the deeply grateful Nils Klim Laureate.

In his acceptance speech, Dellsén pointed to how philosophy, for him, “is all about thinking things through for yourself”. “When we refuse to take other people‘s word for something and instead think the issue through for ourselves, we reduce the chances that the community we belong to reaches a consensus on misguided ideas”, said Dellsén. “In an important sense, then, we owe it to others to think for ourselves.”

About the Holberg Laureate

Paul Gilroy (b. 1956) is currently Professor of American and English Literature at King’s College London. In August 2019, he will take up the position of Professor of the Humanities at University College London (UCL), where he has been appointed founding Director of UCL's new Centre for the Study of Race and Racism.

Before joining King’s College London in 2012, Gilroy had held positions at Goldsmiths’ College, University of London; Yale University; and London School of Economics, among others.

Alongside his academic work, Gilroy has worked as a curator, journalist, researcher, and musician. His subsidiary career as a critic and commentator specialising in the literature, art, music and expressive cultures of the African diaspora has involved him in writing for numerous publications.

Gilroy has published seven books, in addition to three as a co-author, and scores of scholarly articles and essays. His books include: ‘There Ain’t no Black in the Union Jack’: The Cultural Politics of Race and Nation (1987); The Black Atlantic: Modernity and Double Consciousness (1993); Against Race (2000); After Empire (2005); Darker than Blue: On the Moral Economies of Black Atlantic Culture (2010).