The shortlist for the 2021 Holberg Prize is ready

The nomination process for the Holberg Prize.

The Holberg Committee met on Friday 16 October to discuss the nominations for the 2021 Holberg Prize and has now agreed on a shortlist. Due to the ongoing corona pandemic, this year's nomination meeting took place digitally.

Committee chair Graeme Turner and the Holberg Committee has now prepared a shortlist of candidates based on this year's nominations. The Holberg Prize received a total of 102 nominations by the application deadline on 15 June, and the committee is now a step further in the process of its final recommendation to the Holberg Board.

New members to the Holberg Committee

The meeting on Friday was the first for the Holberg Committee's two new members, Heike Krieger, Professor of public and international law at the Freie Universität Berlin, and David Nirenberg, Professor of medieval history and social thought at the University of Chicago. The new committee members will replace Björn Wittrock and Dame Hazel Genn who resigned earlier this year, the latter from the position as committee chair. The Holberg Prize is very grateful for their invaluable efforts during their 6 years in the Holberg Committee.

Professor Maurice Crul from Vrije Universiteit Amsterdam acts as deputy to Professor Cui Zhiyuan, who is on temporary leave this year.

The Holberg Prize received a total of 102 nominations from 87 unique candidates. This is in line with the average over the past five years, and it appears that the ongoing corona pandemic has not had a significant impact on this year's nomination figures. Of the nominations, three quarters were nominated for the first time.

Geographically, there is a predominance of candidates from the United States, followed by the United Kingdom, Germany and Italy. This year, there are also particularly many candidates related to sociology, theology and law. The table below shows roughly the distribution of academic disciplines for this year's nominations. 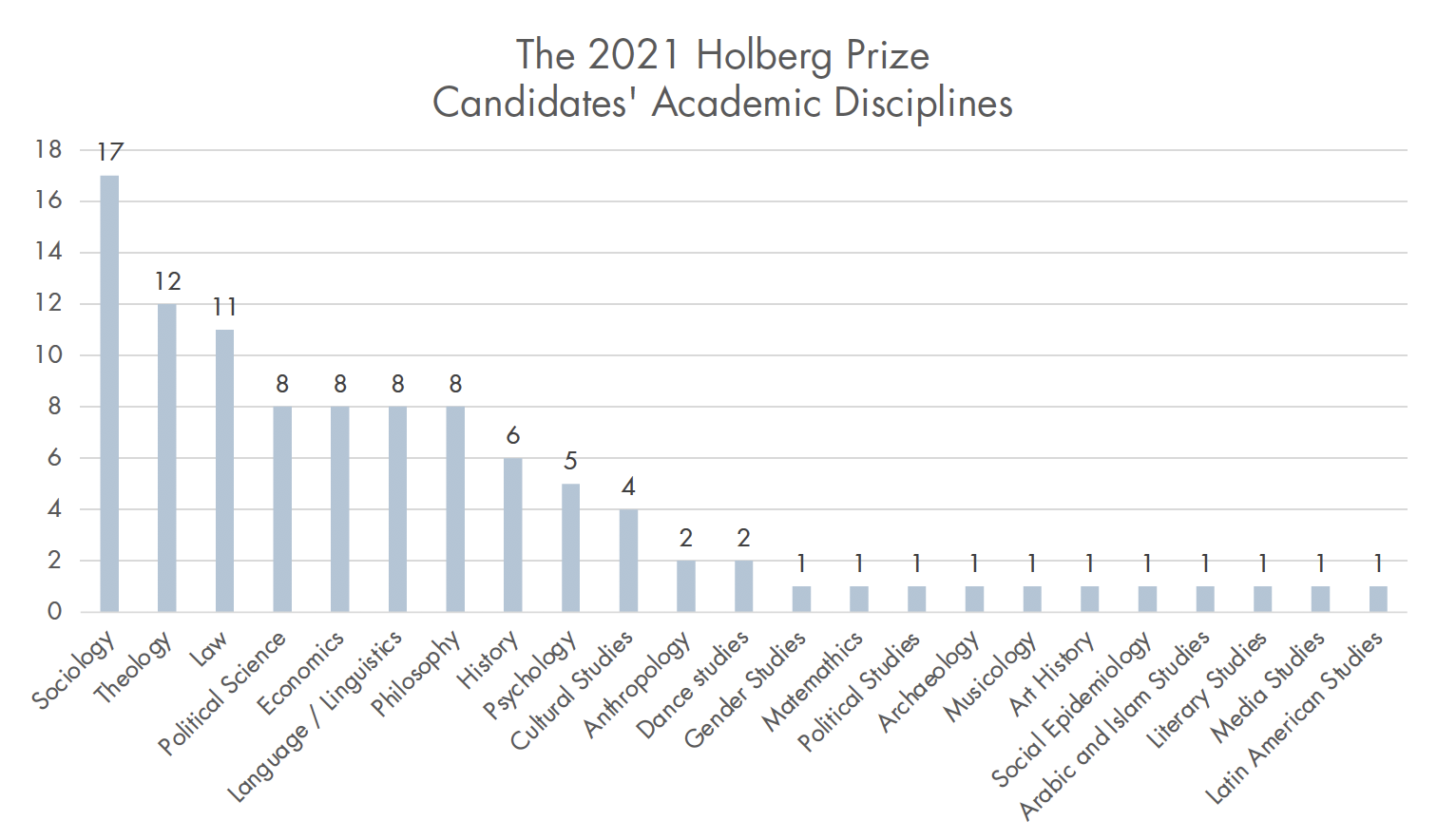 Next steps in the process

In the further process of choosing a Holberg Laureate, peer reports for the shortlisted candidates will be obtained. These reports will form an important basis for the committee's next meeting in February, where they will decide on a final recommendation to the Holberg Board. The 2021 Holberg Laureate will be announced in mid-March.

Due to the corona situation, the Holberg Week, which was to be held June 2-5 earlier this year in honor of Holberg Laureate Griselda Pollock, was canceled. Consequently, the Holberg Prize is planning for a double celebration in 2021, where both Pollock and the new Holberg Laureate will participate as guests of honour.

Call for nominations for 2022