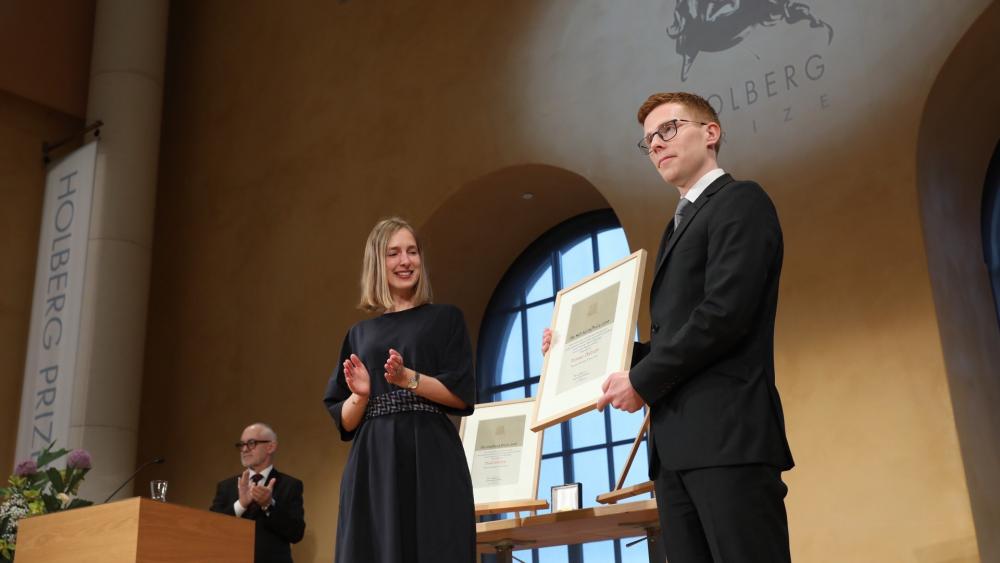 Finnur Dellsén's Acceptance Speech, held in the University Aula in Bergen when he received the Nils Klim Prize in 2019.

It is truly a great honor to stand before you today and receive the Nils Klim Prize. I feel humbled to join the ranks of the outstanding young Nordic scholars who have received this prize in previous years for their research in various fields across the humanities, social science, law and theology. I am also deeply grateful to all of you for being here to share this occasion with me and the Holberg Prize recipient Paul Gilroy.

Philosophers enjoy the dubious distinction of being as often ridiculed as they are revered. As an example of the latter, the character of Nils Klim, in Ludwig Holberg‘s satirical novel, describes the inhabitants of philosophical-land as "mingled together with swines". The philosophers living in this land are entirely preoccupied with abstract and impractical concerns, to the point of neglecting their surroundings, personal hygiene and relationships. Being a philosopher myself, I hope Holberg‘s description of us isn‘t entirely accurate, although I have to admit that pursuing a career in philosophy has often come at a cost to those around me. In particular, I would like to use this opportunity to thank my partner Erla Gisladottir for her unwavering support and understanding as I was going through graduate school and struggling to establish a career in academia not long ago.

I was drawn to philosophy not so much because of its particular subject matter – in fact, I doubt that philosophy even has a subject matter, since one can ask philosophical questions about anything – but rather because of the particular manner in which philosophers tend to approach things. Philosophy, at least for me, is all about thinking things through for yourself. In my case, I have among other things tried to think through a cluster of issues concerning how to understand and explain the success of modern science in light of its history. The conclusions that I have reached largely appeal to the social nature of science; that is, to the fact that scientists interact, compete, and cooperate.

In fact, one of the modest contributions I have made to scholarship in philosophy is to try to explain the value of the very thing that I think philosophers are so concerned with, namely, independent thinking. When we refuse to take other people‘s word for something and instead think the issue through for ourselves, we reduce the chances that the community we belong to reaches a consensus on misguided ideas. Independent thinking therefore increases the collective reliability of the community to which we belong, even in cases when we as individuals gain nothing from it. In an important sense, then, we owe it to others to think for ourselves.

I would like to extend my gratitude to a few of those individuals and institutions who have been instrumental to my development. I am deeply indepted to my Ph.D. advisor at UNC Chapel Hill, Marc Lange, who has been a true role model for me as a scholar, teacher, and advisor. I am also grateful to my postdoctoral mentor Maria Baghramian at University College Dublin, who is an extraordinary academic and has been a constant source of wisdom and support. I would like to thank the Inland Norway University of Applied Sciences and my colleagues there, who took a chance on hiring an Icelandic-Swedish philosopher to teach their Norwegian students, and my colleagues at the University of Iceland for their support since my move back to Iceland. Most of all, though, I am grateful to my family and my partner Erla for being there for me this whole time.

Speech delivered at the University Aula, Bergen, on 5 June, 2019