The problem of good judgement 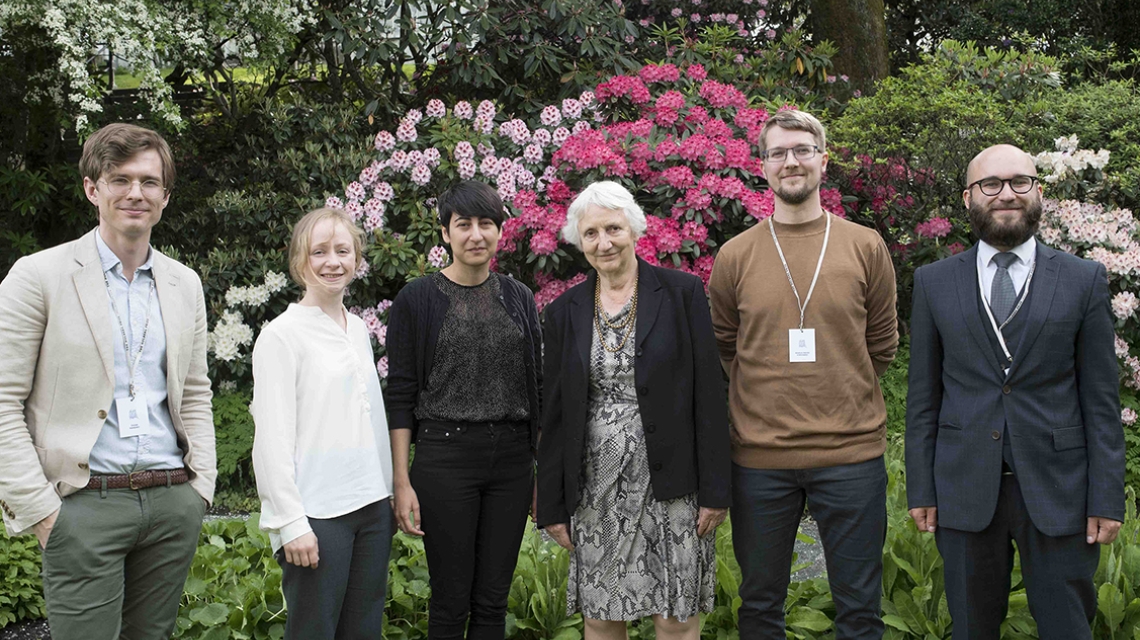 On the opening day of the Holberg Week 2017, five PhD students from Nordic universities joined Holberg Laureate Onora O’Neill for a discussion on judgement and interpretation.

A broad range of themes and angles were discussed at Christie Café, at the University Museum of Bergen, on 6 June, when this year’s Masterclass explored judgement and interpretation with Holberg Laureate Onora O’Neill.

The topic of “judgement and interpretation” is both neglected and somewhat odd, O’Neill submitted. In our daily lives we prize good judgement, whether we refer to people’s general assessment ability, or the judging of quality in specific cases. But what is it that makes judgement good or bad, whether in law or in literature, in politics or in everyday life?

The participants held presentations that related their research and their disciplines to questions of judgement and interpretation. The following discussion also focused on selected works by Immanuel Kant, Hans-Georg Gadamer, Ronald Beiner, Ludwig Wittgenstein, Paul Ricoeur and Onora O’Neill.

What ought we do?

Judgement is essentially what we think have to use when everything else we have is not giving us an answer, such as rules and principles, explained O’Neill. It is one of the most ancient topics in philosophy, a topic that both Kant and Aristotle have struggled with: How should acts of judgement be done, and how do we move from indeterminate principles to more determinate judgements?

Judgement is also a number of different things, depending on what you are trying to do. For instance: When we are dealing with applied, determinate judgement, or classification, we have a concept or a law which may or may not apply to a specific case–such as distinguishing between a swan and a goose. Even this sort of judgement may not be simple, when we are dealing with borderline cases.

Reflective judgement, on the other hand, may refer to how we choose which laws or principles that ought to apply. How do we decide which laws are most significant or suitable?  This type of judgement has a larger degree of freedom, but determining how we distinguish better from worse is not simple. This type of judgment may be enormously important in many aspects of life, for instance in interpreting religious texts or, interpreting law or understanding what other people are doing.

Some scholars have claimed that determinate judgement is arbitrary and a matter of individual choice. However, acting in itself is neither determinate judging, nor reflective judging. When acting, you have to enact and shape your principle. The particular is not yet given, what you have is the principle.  Only after the act can we determine whether the judgment was good or bad. So how do we find our way from the principle to enacting the principle?

In his presentation, Maxim Usynin related judgement and interpretation to his research on international arbitration of investment disputes, as an aspect of the effort to promote good corporate practices and global justice by the means of international investment law.

Usynins research focuses on treaties designed to protect foreign investments, and he explores to what extent arbitrators and judges are bound by the principles imposed on them by states in their treaty mandate, and whether they can engage in adjudicatory activism.

In his introduction, Usynin highlighted how adjudicators face interpretation challenges when faced with matters that were not yet an issue when the treaties were signed. This touches not only on the issue of sovereignty, but also on global issues such as climate change, sustainable development, human rights promotion and poverty reduction. These are all issues that call for a paradigm shift in international investment law.

The next presenter, Markus Mikael Kortesmäki drew on Wittgenstein’s work and discussed how literal meanings of linguistic expressions serve as principles that govern our linguistic practices. He used examples that illustrated how ascriptions of meaning presupposes a large body of shared, unquestioned inferences.

Next up, Torhild Elin Nordtveit discussed how her issues of judgement and interpretation were highly relevant to her research on the sources of law concerning Changes of Debtors.  This is a situation where the Debtor retreats from his obligation by transferring the obligation to a person outside the relationship, the New Debtor. The Changes of Debtors situation involves a number of dilemmas relating to individual autonomy and Freedom of Contract.  Nordtveits presentation provided what O’Neill called “a very graphic illustration that even what we call black letter law, is not necessarily so black and white.”

The third Masterclass participant, Oscar Wandery, took the topic in a different and somewhat more sobering direction: issues of judgement and interpretation in palliative care. These may include for instance decisions on curative actions and “quality of life,” as well as existential judgements made by the patients. Pallative care involves situations that are generally marked by grief and difficulty, when communication often becomes hard and may even break down. One cannot easily rely on practical instructions in such situations, and Wandery discussed how Kant’s and Wittgenstein’s work on judgement may offer some guidance.

Finally, Zohreh Khoban related the Masterclass topic to theories of deliberative democracy and citizen participation, and to the concept of “ideal role taking” in the process of making considered judgements. This requires morally judging subjects to cognitively and emotionally put themselves in the position of others, something Kant described as necessary for effective judgement.

Following the presentations, various aspects of judgement and interpretation relating to the PhD candidates’ research were discussed.

O’Neill pointed to problems that might arise with attempts at deliberative democracy when there is a problem with corruption in a culture: When engaging in discursive democratic processes that require an ‘enlarged view,’ may people take a corrupt enlarged view, and will interaction have any chance of achieving impartiality or an unbiased resolution of problems? Khoban held that this is not necessarily possible, and it does not always have to be an end in itself:  “Different discourses will always affect how we think.”

Another point was raised in response to Usynin’s presentation on international arbitration of investment disputes:  Should we encourage progressive interpretations of treaties? The answer may depend on whether you prefer a legitimate judgement or an ethically ‘good’ judgement. This may be a dilemma, as one may have to live with less ethically sound judgements in order to achieve legitimacy.

Usynin, on his part, underscored that you always have to base decisions on law, so there is a legal machinery at work. Like any machinery, however, it can be used in different ways. For instance, by interpreting certain provisions you can choose the ones that implicitly are more morally compliant.

Power to the judges?

O’Neill also addressed judicial interpretation in the UK and in Scandinavian countries. In the UK there is a tendency to be critical of judicial expansionism and activism, a critique that is generally conservative in its tone. Some are worried that in its interpretation the law is being pushed by well-meaning judges and arbitrators who gradually wish to add more and more through interpretation. The result may be something that is far from the intention of the legislators, far from what is feasible with respect to subject law, and far from the needs of society.

Nordtveit commented on how the Scandinavian legal system is a bit peculiar, with elements of both civil law and common law. In Norway, preparatory works of the legislature are often used as a source of law when interpreting legal acts.  For instance, you can refer to draft legislation that is sent out for comments. You can also in some circumstances refer to court decisions in other jurisdictions. Both in the UK and in Norway the intention of the lawmakers’ may be considered, but with different restrictions. In this context, some legal acts are deemed too old, and others too new. These are just some of the areas where issues of judgement and interpretation are essential.