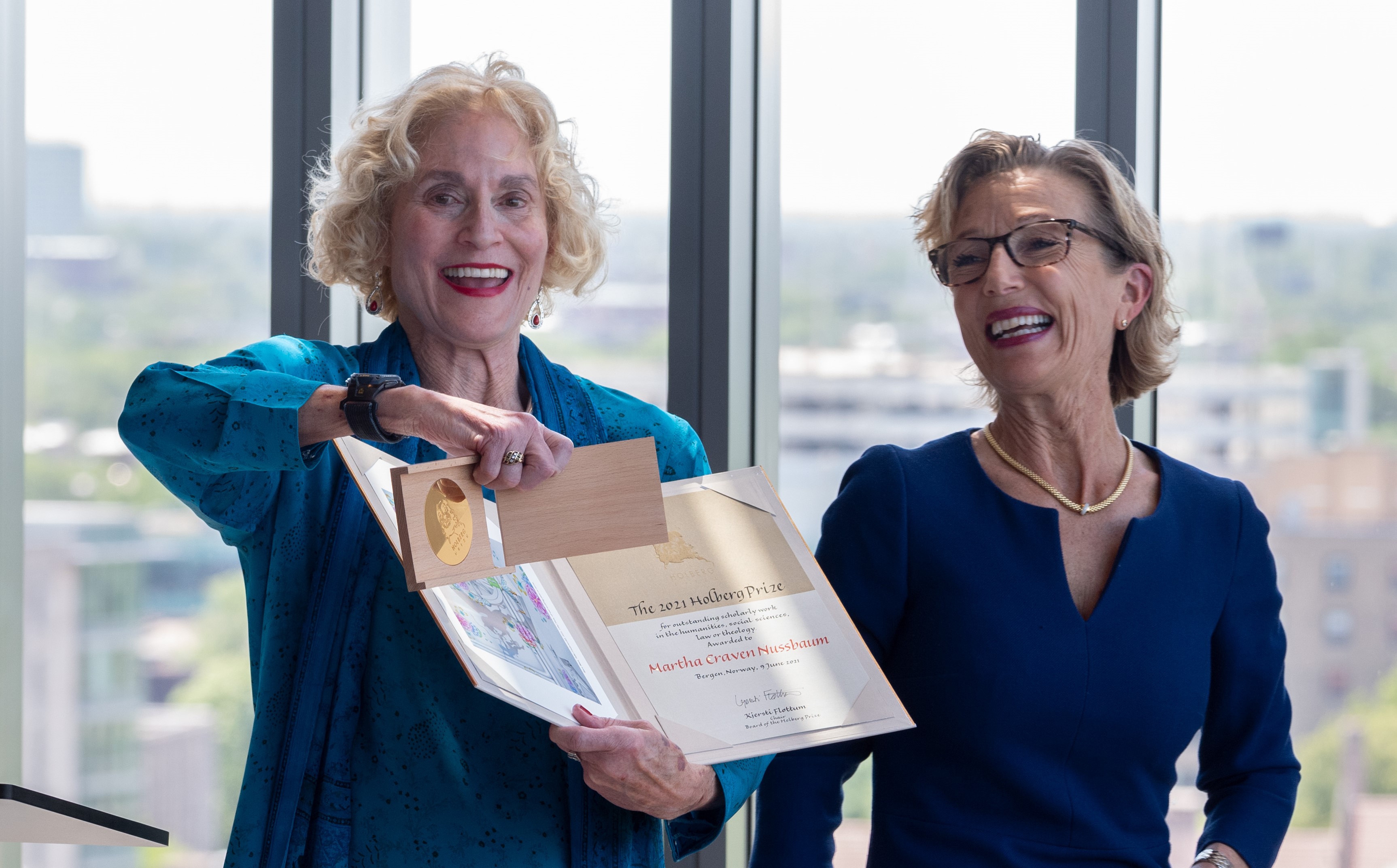 I am immensely grateful to the Government of Norway for the honor of this prize.  It is wonderful that two representatives of that government are present here: Consul-General Harriet Berg from New York, and Honorary Consul Susan Meyer from Chicago.  And it is very fitting, though originally unintended, that this ceremony is taking place on the campus of the University of Chicago, where I have found a happy home since 1995. I couldn’t do my work without that great university, both its law school and its philosophy department, which have created an ideal environment for work and teaching. If I singled out all the individuals I want to thank – starting, as I would have to, with my family and my elementary and high school teachers – this speech would go on and on, and I would be played off the stage like those self-indulgent speakers at the Academy Award ceremonies.

So I’ll just stick to this university.  I want to thank the three Deans who are present here: Dean Tom Miles of the Law School, Dean Anne Robertson of the Humanities Division, and Dean David Nirenberg of the Divinity School (where I hold a courtesy appointment).  Above all, though, my life is spent in the philosophy department, where over the years I have worked with such marvelous graduate students, who tell me exactly where I am wrong and who do new creative work that inspires me; and in the Law School, where the students are superb, and often mingle valuably in classes and seminars with the Philosophy graduate students, since, unlike law students in most countries, they have a liberal arts background before starting law, and are comparable to the best PhD students.  I want particularly to mention the rich faculty culture of the law school, where so many of my manuscripts have been poked and prodded by critical questions asked in the best Socratic spirit.   People are so generous, giving their time to others: I remember one Friday, when I finished a draft of a lecture I’d been working on for a long time, and was pretty nervous about the occasion and the speech, sending it to six of my law colleagues that day – and by Monday I had received immensely helpful written comments from all six.   I hope I match that in my conduct, but it’s a daunting standard to live up to.  If there is just one individual whom I must thank by name, it is my frequent co-author Saul Levmore, who unfortunately is unable to be here today.  He never lets me become complacent, he always tells me that I am wrong, and why, and I hope that, rather like Cicero and Atticus, our exchanges, and even jokes, improve both our insights into the highly relevant theme of aging, on which we co-wrote a book in 2017, but also improve the actual experience of aging.

My career has focused on two areas: normative theorizing about justice and investigation of the nature and role of the emotions. Increasingly I’ve been bringing the two together and thinking of the role emotions play in moving us toward or, as the case may be, away from a just and decent society.  All of this work has been continually nourished by my long study of the history of Greek and Roman philosophy, very much including the philosophical elements of literature.  (Of music too, but there’s no time to say more about that today.) In the process, I’ve also made an attempt to address a wider public and to play the role of what people call a “public philosopher”, something quite difficult to do in this country. But I’ve tried to do it always in a way that upholds philosophical standards and honors the work of other thinkers past and present.  The Holberg Prize is that rare prize that singles out the humanities, so often ignored in our public culture, and so much in need of more support today.

Our society, like Norway, has come through a great and terrible trauma.  We are starting to come out the other side of that darkness, as the Mozart aria I’ve chosen,  “Un Moto di Gioia,” depicts (and I want to thank Patrice Michaels, not only a fine artist but also a fine teacher of struggling voice students like me,  for being here to sing it). Prominent in our shared experience in that dark time have been many emotions that have been both personal and part of our shared public life: fear, grief, and, all too often, anger.  Because I think anger is especially dangerous and destructive in our public life, let me dwell for a moment on that emotion, showing how a philosophical approach to the emotion of anger and the fear that so often underlies it can help us come to grips with the challenges of our political moment – a theme I’ve written on in my books Anger and Forgiveness and The Monarchy of Fear so this is but a sketch of a much fuller argument.

Let’s start with a literary depiction of retributive anger: the final play of the Oresteia of Aeschylus.  As the play opens, we see a group of ugly creatures, half-human, half-beast, crouching on the ground. These are the Furies, goddesses who embody the human desire for retributive payback. As Aeschylus describes them, they are black, hideous; their eyes drip a foul liquid. They even vomit up clots of blood they have ingested from their prey. Their only words, at first, are a predator’s hunting cry: “get him get him get him get him.”  But by the end of the play, they have been transformed. They have not simply accepted the constraints of the rule of law, joining the new democracy. They have also, and most important of all, given up the retributive part of their anger: they now look forward, not back. They vigilantly protect citizens from crime, but for the sake of future welfare, not for the sake of payback.

To go further, however, we need a philosophical analysis, and in the Western tradition the definition of anger that influences all subsequent thinkers is Aristotle’s.  (It’s actually similar to definitions in Indian philosophy, the reason for my including an expert in those traditions in next week’s Holberg Symposium.)

Aristotle says that anger is a painful response to a significant damage, to something or someone that the angry person cares a lot about – and a damage this person believes to have been wrongfully inflicted, not just accidental. So far so uncontroversial, and anger so defined seems not bad or destructive, but an ingredient of a good society’s confrontation with wrongdoing.

But then the Furies enter.  Aristotle claims that a wish for retribution or payback, some sort of pain for pain, is an essential part of anger as commonly experienced. This needs a long discussion, but if we cut to the chase I think Aristotle is correct: when we are angry we typically do want the wrongdoer to suffer, if only through legal punishment or even divine intervention. (Gandhi agrees.) Or, even more subtly, we find ourselves wishing that the person who wronged us will simply have a miserable life in future, that the second marriage of your betraying spouse is a dismal failure.

But the idea of retributive payback, though ubiquitous and deeply human, is empty and quite unhelpful, if what we want is to change the future, which is the only thing we can change.  Capital punishment does not bring back the life that was lost, although many survivors of murdered loved ones become obsessed with it as if it does some real good; punitive litigation does not make a new future after a broken marriage.  I actually had a different view about anger until around 2015, but I changed my mind as a result of critical and self-critical reflection.  (It is surprisingly delightful to change one’s mind. We should all do it more often.) So, in my other work I then investigated the futility of anger at greater length, and show how this kind of empty thinking is often closely linked to fear and insecurity, to an underlying sense of powerlessness that reaches back to infantile experience, but that is exacerbated in times of personal or social unrest. Feeling powerless, we want control in an uncertain world, and anger gives an illusion of control: inflicting pain on someone feels powerful, and distracts us from the task of making a productive life.

In politics this is especially true.  Our nation right now, in the wake of COVID has many real political and economic problems to solve: economic uncertainties, the claims of immigrants and asylum-seekers, the demands of long-marginalized people and groups.  It is easy and human to feel helpless in the face of such problems.  How easy, then, to turn instead to anger and scapegoating, imagining that inflicting pain on opponents will fix the problem.  We consequently see these days a veritable epidemic of anger – on airplanes, at sporting events, and the far more sinister instances of anti-Semitic and racial hate crimes, not to mention the assault on our nation’s Capitol, a hideous explosion of retributive fantasy.  (And note that this way of reacting is bad whether the opponent has actually wronged you or not: even real wrongs need to be addressed in a constructive and cooperative spirit, not in the spirit of the Furies.)

But my Aristotelian analysis also shows us where progress can begin: there is a conceptual separation between protest and payback.  We can have outrage at wrongdoing and commit ourselves to correcting it, without doing so in a backward-looking retributive spirit.  There is a type of anger, which I call Transition—Anger, that keeps outrage at wrongdoing, but turns to face forward, dropping payback in favor of making a better future.  That’s what happened to those Furies.  To use the words of Martin Luther King, Jr., who reflected profoundly about anger, almost 2500 years after Aeschylus, the anger of these Furies has been “purified.” That’s what King said had to happen with the anger of Americans, including those in his movement: they had to give up the retributive part of their anger, which is, to use his words, “confused and not radical,” while keeping a future-directed outrage at wrongdoing and a truly radical commitment to pursue future justice constructively, with hope and faith in the future, and a love of human beings, even their enemies.

Philosophical analysis, animated by literary imagination, does not solve our problems. For that we need sound economic planning, historical and scientific knowledge, psychology and psychotherapy, and multidisciplinary cooperation of many sorts.  But philosophy can help us understand ourselves and see where the problems lie, and it can also help us to identify some not so productive ways to respond to them.  In its methods philosophy also embodies part of the solution: a decent, respectful, rational and imaginatively engaged way of relating to other people.

In these two related ways philosophy contributes to the task that is always before us, in Aeschylus’ time and in our own, since we always must face forward, wherever we are – of building a constructive, loving, and non-retributive society that doesn’t play childish payback games, but genuinely pursues human welfare.

The speech was given at the University of Chicago on 4 June, 2021, and it was included as part of the 9 June Holberg Week Virtual Award Ceremony , which was hosted from the University Aula in Bergen, Norway.