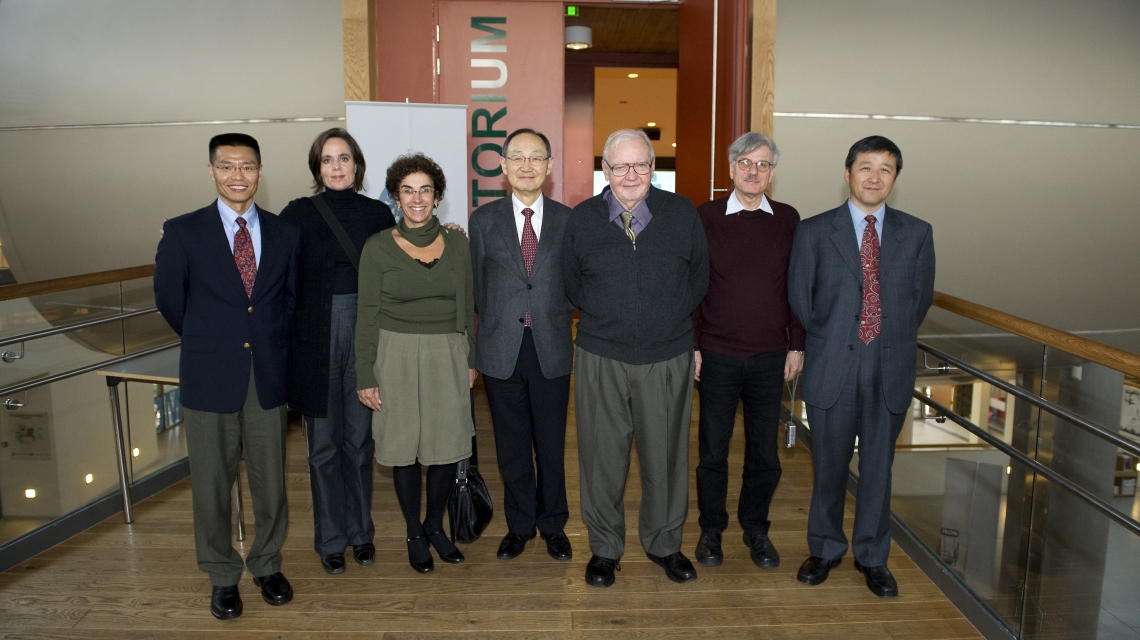 Six distinguished scholars from four continents gathered Tuesday, 25 November, at the University of Bergen in Norway to discuss the ideas of cultural critic Fredric R. Jameson, Holberg Prize Laureate 2008. At a day-long symposium, the scholars made presentations on cinema, history, politics, and literature, all revolving around the central themes of Jameson's work: the need to consider art in its historical context, and the connection between global capitalism and postmodern society.

Fredric R. Jameson spoke of the way that people around the world are affected by their national identity. This identity is essential to understanding the culture created within that nation. Rather than thinking only of a reader and a text, critics must consider how the reader's nationality is related, through history, to the author's nationality. For the mostly Norwegian audience, Jameson commented on the importance of having a prize like the Holberg come from a "non-hegemonic" country like Norway.

Transformations of the Image: Fredric Jameson and Film Culture in Transition (mp3)

Astrid Söderbergh Widding, Professor of Cinema Studies at Stockholm University and Vice Dean of the Faculty of Humanities.

Astrid Söderbergh Widding discussed how film can explore the relation between culture and economics. She cited Jameson's phrase "the age of spectacle" to describe the current situation and showed a short clip from the 2006 film Container by Lukas Moodysson. Dr. Widding asserted that Jameson's influence has been so integral to the study of modern film that it's difficult to measure.

Astrid Söderbergh Widding is a member of the Royal Swedish Academy of Letters, History and Antiquities, and Chair of the Ingmar Bergman Foundation. Her publications include "Gränsbilder. Det dolda gränsrummet hos Tarkovskij" (Stockholm, 1992), "Moving Images: From Edison to the Webcam" (co-ed. with Fullerton, John Libbey, 2000), and "A History of Swedish Experimental Film Culture" (with Andersson & Sundholm, SLBA, forthcoming). She also contributes criticism to Svenska Dagbladet. Currently she is at work on a book on French phenomenology and cinema.

Paik Nak-chung is a now-retired professor of English literature at Seoul National University and the founding (and current) editor of the Changbi Quarterly, the largest journal of its kind in Korea. He discussed the idea of a "singular modernity" brought about by capitalism and emphasized the importance of developing "multiple modernities" among nations. He noted that the great waves of Western intellectual thought-realism, modernism, postmodernism-arrived on Korean shores almost simultaneously because of the history of colonialism. The main task for the Korean peninsula-to overcome division-is also the task for the larger world, according to Paik: Nations and localities must pursue planetary solidarity to overcome the singular, western view of what the world should be.

Paik Nak-chung has published five collections of literary criticism criticism (beginning with National Literature and World Literature, 1978, including the most recent The Rewards of Literature in the Age of Reunification, 2006); four books on political and social themes (including The Shaking Division System, 1998, and the more recent Reunification Korean-Style, Present Progressive Tense, 2006); and The Conversations of Paik Nak-chung in five volumes (2007), in Korean; plus seven volumes of translation into Japanese and one into Chinese.

Maria Elisa Cevasco, Professor of English and Cultural Studies at the University of São Paulo, Brazil.

Maria Elisa Cevasco focused on the triumph of Marxist politics with her presentation. Brazil is on the periphery of global capitalism, she related, and the inequities of this consumption-based system are most stark there. Later, she condemned those critics and works of literature that refer only to themselves, declaring them to be part of "an ocean of irrelevance." Rather, she argued that cultural criticism that includes history and the social sciences has a unique power to bring attention to our sense of the world, our philosophy and our way of life. Criticism, a disruptive force, can push people to contemplate a more perfect world. Jameson's detailed critique of capitalism, which Cevasco has translated into Portuguese, explores alternatives to the market and creates a new idea of how the world could be.

Wang Hui described Jameson as an "old friend, comrade and counterpart to Chinese intellectuals." Professor Wang, one of China's most famous thinkers, noted that Jameson's visit to China in 1985 brought the first discussion of postmodernism to China. That introduction happened as China was recovering from Chairman Mao Zedong's Cultural Revolution and beginning to embrace modernization. Through Jameson, capitalism became established as an ideology rather than a reality-the exact opposite of the situation in the west. Using Mao's terminology, Jameson stated during his visit that it wasn't possible to understand first-world literature without considering third-world literature. Wang criticized the illusion that any country was immune from the effects of global capitalism and praised Jameson's inflammatory exhortation of 1985 that the Chinese should re-read Mao.

Michael Löwy discussed ways in which romanticism-a philosophy that remains alive and bright today, according to Löwy-has sparked protests in the name of pre-capitalist values. Romanticism is is often described as nostalgic and backward facing, he said, but the movement can be progressive, even revolutionary, when nostalgia for the past is invested in the struggle for a utopian future. Löwy cited the example of surrealism, a radical, revolutionary protest against bourgeoisie society, as a forward-looking view that is associated with romanticism.

Michael Löwy was born in Brazil but lives in France since 1969. His books and articles have been translated into 28 languages. Among his recent publications : Romanticism against the current of modernity (with Robert Sayre), Duke, Duke University Press, 2001 ; Fire Alarm. Reading Walter Benjamin's 'On the concept of history ', London, Verso, 2005 ; Franz Kafka, rêveur insoumis, Paris, Stock, 2004.
Google Books Google Scholar

Perry Anderson, is Professor of History at the University of California, Los Angeles and an editor of the New Left Review.

Perry Anderson was the explicit historian of the symposium. He elaborated several direct, influential quotes from Jameson, including "narrative is the supreme function of the human mind" and "we cannot NOT periodize." Anderson noted that even at the end of history, there is curiosity about what is next. In his view, Jameson has done more than any other thinker to hypothesize exactly what that will be.

Perry Anderson's publications include: Passages From Antiquity to Feudalism (1974), Lineages of the Absolutist State (1974), In the Tracks of Historical Materialism (1985), English Questions (1992), A Zone of Engagement (1992) and The Origins of Postmodernity (1998).
Google Books Google Scholar